By Janine DunlopFebruary 22, 2022Congratulations, In local news
No Comments 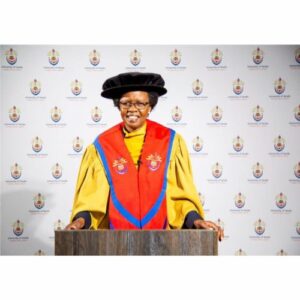 CHELSA congratulates Advocate Mojanku Gumbi on her inauguration as Chancellor of the University of Venda. While her appointment took effect from 1 January 2020, her installation was delayed due to COVID-19.

She takes the reins as the sixth Chancellor of the university, but the first woman to have occupied this position.

“It is an honour that I accept with humility, in particular because I follow in the hallowed footsteps of one of the outstanding sons of our country, Ntate Walter Sisulu, as well as those of Presidents Matamela Cyril Ramaphosa and Kgalema Motlanthe”.

Read more on the University of Venda News page.

CHELSA strives through visionary and visible transformational leadership to ensure that the Higher Education sector is provided with optimal access to information for the purpose of learning, teaching, research and community development.